“Um, blood drives are super important. When I had the first ten feet of my extra intestines removed, they severed my mesenteric artery and without a transfusion, I almost died.”
—Andrea to the other Chanels[src]

Andrea, better known as Chanel #10, is a recurring character on Season Two of Scream Queens. She was a patient at C.U.R.E. who was born with no kidneys and has 30 extra feet of large intestine. She was recruited by Cathy Munsch to join the Chanels in Chanel Pour Homme-Icide and remained a member of the group until her death in The Hand.

She is portrayed by Dahlya Glick.

After Cathy discovers that Chanel is recruiting more Chanels to assist with the workload, she thinks it's a great idea, and decides to hire three new Chanels of her own, one of them being Andrea. Cathy calls the new girls into her office and introduces them to their fellow Chanels. She gives Andrea the title of Chanel #10, and reveals that she was born without kidneys and has 30 extra feet of large intestine. Chanel then demands that all of the new Chanels, along with Marguerite and Daria, go clean out #5's dirty bedpan, and the girls leave to do so.

Chanels #7-11 are then seen walking down the hall after the meeting. Chanel #11 questions if they will get paid for their new job, but Andrea says she thinks it's more of an internship. As they turn a corner, the Green Meanie suddenly pops out, wielding two machetes. Andrea and the other Chanels run in the other direction, but in the process, they trample Chanel #11, leaving her behind and subsequently getting her killed by the Green Meanie.

Andrea is first seen outside the hospital with Zayday, Ingrid, and the rest of the Chanels, as Cathy is showing them contaminated blood samples, explaining that most of the blood in the hospital is unusable. She declares that due to the blood shortage, they are in desperate need of donations, so Chanel suggests that they hold a blood drive, to which Cathy agrees.

Shortly thereafter, Ingrid gathers the hospital staff for a meeting outside, and Andrea is shown amongst the crowd, standing with her fellow Chanels. Ingrid then announces that the blood drive is now being turned into a contest, with the prize being an all expense paid trip to Blood Island. All of the staff begin cheering in excitement, including Andrea, who is seen talking to #9.

Later that day, Andrea is sitting on the couch at the Chanels' apartment, donating blood to help Chanel win the blood drive. After Daria questions why the blood drive is so important, Andrea explains that blood drives are super important, as she nearly died while having the first ten feet of her intestine removed, due to the doctors accidentally severing her mesenteric artery. Luckily, she was saved after receiving a blood transfusion.

Andrea is shown working the graveyard shift at the hospital, taking out the trash. She is on the phone with her mother, excitedly telling her how she was made a nurse at the hospital and also became a Chanel. As she enters one of the hospital rooms, the Green Meanie comes up from behind, and begins strangling her with her own headphones. Her phone falls to the floor and its screen shatters into pieces as she tries to break free from the Green Meanie's grasp, but she is unable to do so and is strangled to death. The Green Meanie then drags her body across the room and places her on a hospital bed. Before leaving, they check her for a pulse, confirming that she has a faint heartbeat.

We next see Andrea lying in a hospital bed, hooked up to a ventilator. Ingrid explains that she is brain dead, and that it is acceptable to pull the plug on her, given that she is a registered organ donor. Brock is suspicious that the organ donor forms were forged, but Cathy assures him that they need her heart in order to perform the heart transplant surgery on Anna Plaisance, a new patient of the C.U.R.E. Institute. Ingrid then tells them that Andrea's heart was completely undamaged by the attack, and that it's a perfect match for Anna. Just then, Brock's hand starts getting out of control and begins aggressively jabbing Andrea in the arm with his red pen. He leaves multiple bloody marks in her skin before leaving, embarrassed by his actions.

Hester decides to call a Green Meanie summit, inviting Ingrid, Cassidy, and Wes to come together to discuss the past and future plans for murder. To get everyone on the same page, Hester plans a game called "Who Killed Who?" and reveals a board filled with pictures of each of the various murder victims. Ingrid then proudly takes credit for Andrea's murder, among a few others.

Andrea is wacky, smart and friendly. She doesn't seem to mind about what people think about her, and likes to state her facts and opinions when needed, like when Chanel #8 asked why blood drives are so important, Andrea says that they are and reveals that they saved her life once. She is also very social, and likes to make friends whenever she can, which she easily did with her fellow new Chanels, #9 and #11.

As herself, Andrea wears comfortable and dark clothes with loose necklaces. After being recruited as a Chanel, Andrea wears dark purple as her hospital clothes.

While Andrea is doing her rounds late at night, she speaks to her mother on the phone about her new opportunities at C.U.R.E, having become not only a nurse, but also a Chanel. As she goes to get the trash from a nearby room, the Green Meanie creeps up behind her, grabbing her headphones and tightly wrapping them around her neck. Andrea struggles to break free from the Green Meanie's grip, but she is unable to do so, and ultimately her body shuts down from the strangulation. She collapses into the Green Meanie's arms, where she is then dragged across the floor and placed on a hospital bed. Before leaving, the Green Meanie checks her pulse, confirming that she has a faint heartbeat. She is later pronounced brain dead and hooked up to life support, but Ingrid decides to pull the plug on her, given that they need her heart for Anna's transplant surgery. 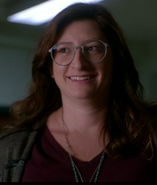 Retrieved from "https://scream-queens.fandom.com/wiki/Andrea?oldid=111736"
Community content is available under CC-BY-SA unless otherwise noted.