Brianne Howey is an American actress, best known for her roles in Horrible Bosses 2, Twisted and I Live with Models.

She portrayed the character Melanie Dorkus on Season One of Fox's horror-comedy series Scream Queens.

Brianne attended Flintridge Sacred Heart Academy in La Cañada Flintridge, California in 2007 and graduated from New York University's Tisch School of the Arts in 2011 with a Bachelor of Fine Arts degree.

Howey knew what she wanted to do for a long time. In high school, she joined the improv team and that led her into acting.

In 2014, Brianne landed her first, breakout major motion picture role in the movie Horrible Bosses 2. She later got a major role in the British television sitcom, I Live with Models, in early 2015, portraying a model named Scarlet.

In late 2015, she guest-starred as Melanie Dorkus on the first season of Scream Queens. 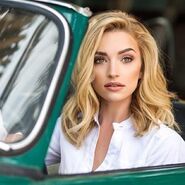 Retrieved from "https://scream-queens.fandom.com/wiki/Brianne_Howey?oldid=105279"
Community content is available under CC-BY-SA unless otherwise noted.