Cecily Legler Strong is an American actress, voice actress and comedian, best known for being a cast member on Saturday Night Live since 2012.

She guest-starred in the second season of Scream Queens as Catherine Hobart, a patient with hypertrichosis - an illness that causes excessive hair growth.

Strong was born in Springfield, Illinois and was raised in Oak Park, Illinois. She is the daughter of Penelope and Bill Strong, who worked as an Associated Press bureau chief and is now the managing partner at a Chicago public relations firm. Strong's parents are divorced. She has a younger brother.

Strong grew up adoring SNL as a child, re-enacting sketches with her friend and watching old SNL commercials on VHS tape. "I had a tape of the best commercials, and I wore it out, every day." She has stated that she was inspired by Phil Hartman.

She attended Oak Park and River Forest High School before eventually transferring for her senior year to the Chicago Academy for the Arts, where she graduated in 2002. After high school, Strong attended the California Institute of the Arts and studied to become an actress, graduating in 2006 with a BFA in theatre. After graduating, Strong then returned to Chicago, where she studied at the Second City Conservatory and iO Chicago.

Strong performed regularly at The Second City and iO Chicago. She also appeared at the Chicago Sketch Fest, Chicago Just for Laughs, New York Sketchfest, and the Edinburgh Fringe Festival. In Chicago, Strong has also performed at the Goodman Theater, Bailiwick Theater, and Mercury Theater and with the all-female improv troupe Virgin Daiquiri.

On September 15, 2012, Strong made her debut as a featured player on Saturday Night Live. Strong co-anchored the recurring Weekend Update segment with Seth Meyers, beginning with the season 39 premiere. Strong later co-anchored with Colin Jost and was replaced on Weekend Update with writer Michael Che, beginning with the season 40 premiere in September 2014, but remained a part of the regular cast. Strong's recurring characters include a ditzy, unnamed pseudo-activist known as "The Girl You Wish You Hadn't Started a Conversation With at a Party"; Dana, one half of a pair of retail employees who always insult their co-workers out of fear of being fired; Kyra from "The Girlfriends Talk Show"; and an unnamed blond former porn star-turned-model/commercial actress who hawks elegant items. Her celebrity impressions include Allison Williams, Anjelica Huston, Ariana Grande, Sofia Vergara, Brooke Baldwin, Fran Drescher, Jill Kelley, Khloe Kardashian, Lydia Callis, Lana Del Rey, Paula Broadwell, Megyn Kelly, Alanis Morissette, Gloria Estefan, Jeanine Pirro, Maria Bartiromo, Sarah Koenig, Rachel Maddow, Melania Trump, Carly Fiorina, and Michelle Rodriguez.

Strong served as the featured entertainer at the 2015 White House Correspondents' Association dinner. She lambasted the various news organizations in attendance, politicians of all persuasions, and President Obama. She also took shots at the US Secret Service, host location the Washington Hilton, Brian Williams, Sarah Koenig, and the state of Indiana. In 2016, she appeared in a commercial for Old Navy, alongside other SNL cast members Nasim Pedrad and Jay Pharoah. That year, Strong also joined the climate change documentary show Years of Living Dangerously as one of its celebrity correspondents. 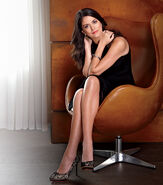 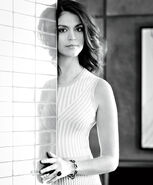 Retrieved from "https://scream-queens.fandom.com/wiki/Cecily_Strong?oldid=105254"
Community content is available under CC-BY-SA unless otherwise noted.