He was a Special Guest Star on Season One of Fox's horror-comedy series Scream Queens as Brad Radwell, Chad Radwell's brother.

Growing up, his mother left his family at a young age and, since then, he had to help take care of his younger siblings, together with his dad and brother. While working his way through adolescence, he learned a lot about work ethic which eventually builds his character. Because he only grew up with a father, his biggest idol is his father. Chad once said in an interview that he could call his father anytime of the day whenever he needs help as his father is his rock. The One Tree Hill (2003) star started his life as a paper boy where he would deliver newspapers around the neighborhood before working as a janitor at Donut World. Chad was only working there for a few days when he lost his job because he was shooting Skittles into the deep-fryer. Sure enough, one of the Skittles got caught in the machine and Chad got fired.

Chad has also worked as a receptionist at a limousine company. When he was 15, he had a resection of his small intestines. His intestines were so twisted they had to be cut out, but there were some complications causing him to not be able to eat for three months. Chad had also broken his nose when he was jumped at a Burger King outlet which then got him into the hospital. It was there where he met the person who inspired him, his nurse. His nurse was a model and she told Chad to start modeling, but Chad only wanted to act. Chad then took a chance and went to a convention in Buffalo and they wanted him to go to another convention in Biloxi, Mississipi.

Not long afterward, Chad got a Tommy Hilfiger campaign which paid his bills and that was when he thought he could really focus on acting. He started out on Dawson's Creek (1998) with his two One Tree Hill (2003) co-stars, Hilarie Burton and Lee Norris. After that, he got a role as rich brat Tristian DuGrey on Gilmore Girls (2000) before turning into Lucas Scott as one half of the brothers in popular teen drama One Tree Hill (2003), where he met best friends James Lafferty and Tyler Hilton. Chad also starred in a B-grade horror flick called House of Wax (2005).

Murray got married, when he was 23 years old, to his One Tree Hill (2003) co-star, Sophia Bush. Chad actually cried on his wedding day, the 16th of April, 2005. In less than a year of marriage, the couple signed for an annulment due to Murray cheating. Chad is engaged to Kenzie Dalton. The couple got engaged on April 4th, 2006. Despite their age gap, Chad is very protective of her and even mentioned in an interview that Kenzie is somewhat like a diamond.

Chad played football growing up and the love of that sport was re-directed into a charity game where he would help underprivileged kids with the money he gains from the audience.

This model-turned-actor has serenaded Jamie Lee Curtis with Britney Spears' "Baby One More Time" on Freaky Friday (2003), became Hilary Duff's "Prince Charming" and even watched Paris Hilton die in a violent on-screen death. He also wrote and directed two different episodes of One Three Hill during his time there.

In 2015, he appeared as Brad Radwell on the first season of Scream Queens. 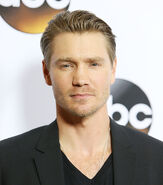 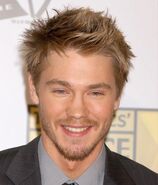 Retrieved from "https://scream-queens.fandom.com/wiki/Chad_Michael_Murray?oldid=105251"
Community content is available under CC-BY-SA unless otherwise noted.