“Aren't we all running from the chainsaws in our past?”
—Wes Gardner to Gigi Caldwell

Chanel finds a new project in Hester, Chanel #3 confesses a secret to Sam, and Grace and Zayday uncover a surprising connection between two fellow students. Meanwhile, Denise sets her sights on one of the Kappas, and Dean Munsch appoints a new Wallace University mascot as Chad and Earl Grey lead the Dickie Dollar Scholars on a witch hunt for the Red Devil.

The episode opens with Grace and Zayday entering a supermarket to get food for Kappa. When Zayday grabs some crisps, she is unaware of the Red Devil standing on the other side, when Grace goes over that side to get sweets she turns around sees the Red Devil at the end of the aisle. In slow motion, she grabs her pink Taser and the Red Devil runs towards her, then she tase him in the "nuts", and Zayday knocks a shelf over to stop him. When the cleaner rushes and says "What the hell's going on?" Zayday says they caught a serial killer and she takes off his mask only to learn it's a guy she knows from class, Eugene Melman, who groans in pain, as Grace tased Eugene in the nuts.

Chanel is seen in the freezer shouting to Chanel #5 about what happened to Chanel #2's body. Chanel #5 says she's out and that Chanel should figure it out on her own. When Chanel #5 leaves, Chanel says she will end her.

Zayday and Grace look for Chanel #2's room, and find her door with a "Do Not Disturb" sign on it. When they find a stain on the floor, Zayday assumes it's blood and Denise pops in and says "Of course it's blood." She sprays some luminal spray on the stain and to confirm that it's definitely blood. She shows Grace and Zayday the tweet she sent in Pilot, Grace then says Chanel #2 is still posting pictures on Instagram and shows one to Denise. Grace and Zayday decide to go visit her parents in California, with Denise tagging along.

Everyone is seen walking with signs and candles towards the campus to protest against Kappa, because they think that the killer will not murder them if they don't support Kappa. Chanel sees Chad and walks over to see if he's okay about Boone and after a while of talking, he says he's breaking up with her again. Chanel #3 is seen struggling to light her candle. Sam walks over to her and lights her candle with hers. Dean Munsch then talks to the crowd and says their mourning the passing of Tiffany and Boone whose death is being ruled as a suicide by the County Coroner. She then says they need to put to bed wild rumors about the Red Devil and introduces a new mascot, Coney, a guy dressed up as an ice cream with a smiley face.

The next day, Denise, Grace and Zayday head to Chanel #2's parents' house and have a talk with her parents. Grace informs them of a serial killer loose in the campus and shows them a picture of Chanel #2, whose name is revealed to be Sonya, saying she's still posting pictures. But Denise says someone might be posting them for her. Her parents then says she was in rehab and were happy when she met Chad, who even had Thanksgiving with her family and wrote her a letter.

Later, Grace is seen with Sam and Jennifer entering their class, when they sit down, Grace learns that the teacher is her father, Wes. They argue, Grace ends up leaving, and Wes continues the class by showing them The Texas Chainsaw Massacre(1974). While the movie is playing, Gigi sneaks in and sits down. Afterwards, she said he was amazing and says she's starting a teacher neighborhood watch and he says he's in. Cathy comes in and tells Gigi to visit her at the tennis court to talk about Wes and staying over at Kappa house.

The next scene follows Coney the new college mascot, enjoying his 15 minutes of fame, before the Red Devil breaks into his room and decapitates him with a chainsaw. Hester then enters Chanel's closet and puts on a hat and scarf until she looks up and sees Chanel, who thinks it's a great idea to give her a makeover so Chad can see the pledges aren't losers. Cathy and Gigi are seen in Cathy's tennis court where she says they'll both move into Kappa house for a week and calls dibs on Wes before leaving.

Sam is seen putting a picture of a woman on a motorcycle in her room when Chanel #3 enters and says she wants to be good friends and tells Sam her secret, which is she found out her father wasn't her real father and her real father is Charles Manson. She says they should be alibi-buddies to back each other up if another murder occurs.

The Dickie Dollar Scholars organize a witch hunt. Grace visits Pete and apologizes for ignoring his messages and both tell each other new clues they found, including a girl who was 2 credits away from graduating 20 years and think she's Sophia. The frat brothers start their witch hunt by getting baseball bats and yelling "Red Devil," they start smashing a red car in the middle of the street and the Red Devil appears with a chainsaw on one side and another person in a Red Devil costume appears on the other. The frat brothers fight the Devils which results in Chad being knocked out and Caulfield losing both arms.

Denise asks Zayday to join her in her car, Denise then handcuffs Zayday and says she found evidence about her, including a chainsaw under her bed which Zayday says was given to her by her grandma. Denise ends up letting her go. Gigi and Wes are seen having a salad together with Cathy joining them, Gigi starts to laugh hysterically when the sauce makes a fart noise when she squeezes it. Zayday is seen in her room with the chainsaw practicing how to get it out from under her bed if something happens, she receives a text and leaves the room with the chainsaw lying on the bed. Gigi is still seen laughing about the fart noise, Zayday walks past and Wes asks her if she's seen Grace. She says no and he calls her and she lies by saying she's at the library, when she's actually at a gas station with Pete.

Gigi and Cathy are seen getting ready to go to bed, Cathy says she likes to sleep with a white noise machine on, and turns it on to different sounds on a high volume. Gigi doesn't like that noise, so Cathy decides to make a compromise and put on the Slasher choice on the machine. Gigi, somewhat annoyed, ends up sleeping on the couch downstairs, and the Red Devil then appears and starts the chainsaw and chases Gigi. Wes, who was asleep in his car hears her screaming and runs to help her and in the process, he gets his arm cut with the chainsaw. Gigi then flips one of the couches and knocks the Red Devil over. The Chanels and Sam run halfway down the stairs and Gigi tells them to call 911. Wes and Gigi then look over the flipped couch to only see the chainsaw running with no Red Devil. Cathy then runs down the stairs and asks "what's going on?" Wes grabs the chainsaw and tells her not to take another step until the police arrive and claims she's the killer.

This episode was watched in its original premiere by 3.46 million U.S. viewers.[1] Chainsaw received mixed to positive reviews from critics, most of them citing that it was a big improvement in comparison to the first two episodes. LaToya Ferguson from The A.V. Club gave the episode a "B-" and stated that there were "moments in the episode that really work create a sense of anticipation that was truly missing in those first two episodes."[2] TV.com's Lily Sparks said that she "enjoyed the third episode maybe three times more than the premiere."[3] Dr. Zaius from Geeks of the Doom cited "I wish they would tone down the silliness, and lean towards the darker side a bit. [...] I enjoyed this week’s show – the show takes nothing seriously, and at times it works very well."[4]

In a much more positive review, Terri Schwartz from IGN said "the FOX series runs the risk of over-complicating itself. Still, the humor remains biting and hilarious and the cast delivers committed, clever performances, and Scream Queens remains a joy to watch."[5] Caralynn Lippo, from TV Fanatic, gave the episode 4 out of 5 stars, citing that Chainsaw "somehow managed to up the campy quotient that was already prevalent in the series premiere."[6] 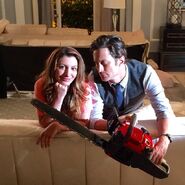 SCREAM QUEENS Unveiling from "Chainsaw"
Dean Munsch announces that the red devil will no longer be the school's mascot.

SCREAM QUEENS A Heinous Violation from "Chainsaw"
Chanel catches Hester in her closet trying on her clothes.

Retrieved from "https://scream-queens.fandom.com/wiki/Chainsaw?oldid=110682"
Community content is available under CC-BY-SA unless otherwise noted.