Cheryl Ann "Cheri" Oteri is an American comic actress, best known for her role as a cast member on Saturday Night Live from 1995 to 2000.

She guest-starred in the episode Handidates on the second season of Scream Queens as Sheila Baumgartner.

Oteri was born Cheryl Ann Oteri in Upper Darby, Pennsylvania, the daughter of Gaetano Thomas Oteri, who founded and was the CEO of a music publishing company, "Of Music". She has Italian ancestry and grew up with three siblings - Denise, Brian and Tommy Jr. in Upper Darby. She attended Archbishop Prendergast High School in Drexel Hill, Pennsylvania.

After moving to Los Angeles at age 28, Oteri worked at A&M Records for four years and eventually joined a comedy troupe called The Groundlings. In 1995, the producers of Saturday Night Live attended a performance with the intention of auditioning fellow Groundlings member Chris Kattan. Oteri performed a monologue during one of Kattan's costume changes, which led to Oteri herself being invited to audition for SNL along with Kattan and fellow Groundling Will Ferrell. She was hired as a repertory performer in September 1995 as part of an almost entirely new cast, which was brought in after the show's disastrous 1994-1995 season. Kattan would not join the cast of SNL until midway through the season.

She has also appeared in several Hollywood movies, including Scary Movie, Inspector Gadget, Liar Liar, Dumb and Dumberer: When Harry Met Lloyd, Shrek the Third, and Southland Tales. She starred in two TV pilots that did not make it to air, Loomis and With You in Spirit.

She has also made guest appearances on television shows, such as Just Shoot Me!, Strangers with Candy, and as an emotionally unstable nanny on Curb Your Enthusiasm. In 2009, Oteri became a regular voice cast in the Fox animated comedy series, Sit Down, Shut Up. She voices Helen Klench, the unappreciated librarian who often gets mistaken for objects, such as brooms or toilet brushes. The series premiered on April 19, 2009 and moved to Comedy Central in May 2010. Kenan Thompson, Kristin Chenoweth, Tom Kenny, Jason Bateman, Nick Kroll, Henry Winkler, Will Arnett and Will Forte were the other main cast members. She also played a tooth fairy on Imagination Movers, a regular on the Playhouse Disney block. 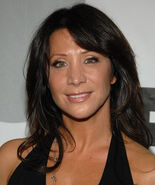 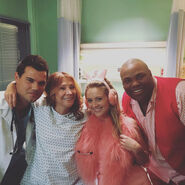 Retrieved from "https://scream-queens.fandom.com/wiki/Cheri_Oteri?oldid=113593"
Community content is available under CC-BY-SA unless otherwise noted.