“Is that a baby? Amazing!”
—Coco after seeing Sophia's baby.[src]

Coco Cohen is a recurring character on Season One of Scream Queens. She was a Kappa Kappa Tau sister in 1995 and is now currently an anchor for Fox News.

She is portrayed by Anna Margaret Collins.

Coco is a former student of Wallace University and an old member of Kappa Kappa Tau in 1995. On a party night, Coco was enjoying the party fun with Bethany and Mandy when Amy approached them with bloody hands. After Mandy and Bethany had reached the bathroom, Coco slowly followed behind to find a cute baby on Sophia's hand. She then told the girls that their favorite song, Waterfalls by TLC, was playing down at the party and rushed them to come down. Not wanting to miss their jam, Mandy, Bethany and Coco ran back to the party to dance and have fun, leaving Amy alone with Sophia. When they came back, the three girls were shocked to find out that Sophia had died of blood loss.

After finding out that Sophia was dead, Mandy, Bethany, Amy, and Coco tried to think of ways on what to do when they were caught and interrupted by Dean Munsch and Ms. Bean. Apparently, Dean Munsch helped the girls cover up the dead body.

After Grace Gardner and Pete Martínez go to the house of an older Mandy Greenwell, she tells them about the night when Sophia died in the bathtub. During the flashback, Dean Cathy Munsch, Ms. Bean, Coco, and the other girls decide what to do with Sophia's body after she died in the bathtub. Cathy then declares that they'll all have to bury the body. She places bags over their heads so they can't see where they're going and drives them to the burial spot. She then makes Coco and the other girls dig, while explaining to them that they'll be thankful for this one day.

Coco is quirky, neutral and is such a party person. Coco usually is really quirky in everyday situations especially in serious one with Sophia's death, instead of freaking out she smiles and adores the sight of Sophia's baby and tells them that their favorite song has come on which is Waterfalls by TLC.

Coco wears a blue medium length dress and a same blue coloured jacket with a white t-shirt, she has blonde hair and green eyes. 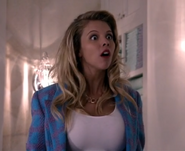 Retrieved from "https://scream-queens.fandom.com/wiki/Coco_Cohen?oldid=98980"
Community content is available under CC-BY-SA unless otherwise noted.