“And just like that, another group of crazy serial killers failed in their mission to destroy me.”
—Chanel Oberlin

Drain the Swamp is the tenth and final episode of the second season of Scream Queens, the twenty-third episode overall, and series finale. Ian Brennan and Brad Falchuk served as writers, with Ian Brennan as director. It had its official release on Fox on Tuesday, December 20, 2016.

The Green Meanie sets its final plan for revenge in motion as Hester makes a bold move to secure her future, and Brock performs a dangerous surgery to save Dean Munsch's life.[1]

The episode starts with Chanel Oberlin absentmindedly making her way to the hospital. Once she nears it, she is attacked by the Green Meanie, only to be saved by Chanel #8, who witnessed the attack. The Green Meanie angrily removes their mask to reveal Ingrid. Sadie is shown putting away papers when the Green Meanie shows up. Sadie is mortified, however, soon notices that the killer is hesitant. The Green Meanie takes off his mask, and is revealed to be Cassidy, who was beginning to have qualms about being a murderer and opts to confront his mother, in order to put an end to the killings.

As soon as Sadie's shift comes to an end and she exits the room, Ingrid stalks into the room while dressed in the other Green Meanie suit. Cassidy takes note of her presence, and she's upset about her frustrated attempts to kill the remaining Chanels. She declares that the girls are very hard to kill, to which Cassidy tells Hoffel that he no longer wishes to kill anyone. Ingrid is surprised, but does not hesitate before threatening him.

Later that day, Hester and Brock are seen on a date. The two of them chat briefly, and eventually decide to flee from the hospital, and steal Cathy's money in order to buy Blood Island and live there, unbothered by any potential threats or serial killers. Meanwhile, whilst cleaning up the hospital, Ingrid goes outside in order to dispose of some barrels. She comes across Chanel #8, who then tells her the humus in the swamp's water is highly flammable. This gives Hoffel the idea to build a fertilizer bomb. As part of Brock's devious plot, he proposes to Cathy. This clearly upsets Chanel, who is shown to be devastated. However, Brock explains that as soon as the Green Meanie takes out Dean Munsch, he will propose to Chanel, which fills her with joy.

Cassidy finally builds up enough courage to talk to Jane about his opinion on the killings. Chanel #3 helps him give his mother the news, however, Jane is clearly not pleased, telling Cassidy that he's dead to her. Meanwhile, Chanel #5 tells Munsch that she might not have Kuru but the only way to find out is to have an open-brain surgery, which would be performed by Brock. With a plan in mind, Ingrid starts draining the swamp of its flammable humus, but accidentally unplugs the cryogenic chamber holding Denise's unconscious body. Meanwhile, Jane is feeding Zayday. The former proceeds to express her sadness to Zayday. Zayday related to the story told by Jane, and is able to convince her that, while she is undeniably a good mother, murder is never the answer. Meanwhile, at the C.U.R.E Institute, the surgery is complete, and Chanel #5 reveals to Munsch that they found no evidence of Kuru in her, but instead, all of her symptoms hinted that she was extremely dehydrated due to the fact that the only liquids she had consumed for a whole year were vodka and scotch.

Later on, Ingrid then leads the remaining staff members and patients into a trap in the basement of the hospital. She reveals her plan, and states that Chanel killed her sister, Agatha. Just then, Zayday arrives in the company of Jane. The two women attempt to stop Ingrid from killing the survivors, but Ingrid is unfazed, and proceeds to shoot Jane, leading to her demise. Ingrid runs away, leaving behind a ticking bomb. As the characters begin to accept their fates, Denise arrives after being absent for several weeks. With skills she learned during training, she defuses the bomb, and successfully saves everyone.

With the bomb out of the way, all main characters, staff members and patients, give chase to Ingrid. The latter proceeds to wind her arm back and throw a machete, which cartwheels through the air, only to pierce Cassidy in the sternum, killing him. Hoffel is not shown to feel any regret for killing her former partner in crime as she continues to run. However, it is not long before she stumbles into a pond of quicksand. She tries to stop, but is carried forward by her momentum and falls into the quicksand. She slowly sinks into it, and is left to die for her crimes. Following the death of Ingrid, there is a fast forward in time, and the new lives of all characters are shown.

Brock and Hester successfully steal from Cathy, and are able to buy Blood Island, where the two slaughter all tourists and remain by themselves, completely in love with each other. Munsch sells the hospital and starts a sex class for women over the age of fifty. Libby and Zayday still work at the hospital, whereas #3 is a manager for Chanel's new medical talk show, Lovin the C. At the end, Chanel is shown leaving the building and entering her car. She then sees an old ring with Kappa Kappa Tau's coat of arms embedded onto it. She proceeds to look in the mirror assembled before her, only to see the Red Devil behind her, causing her to scream. The screen goes black, leaving her fate unknown. 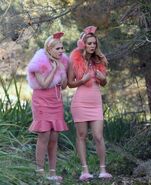 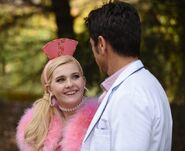 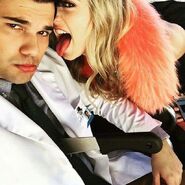 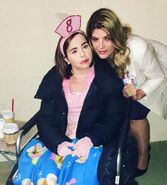 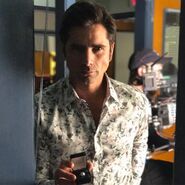 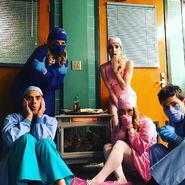 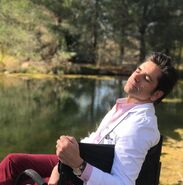 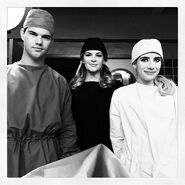 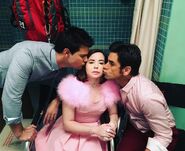 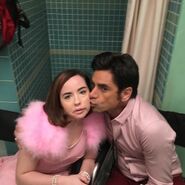 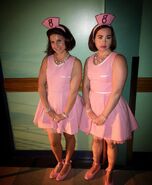 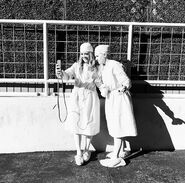 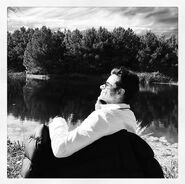 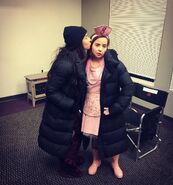 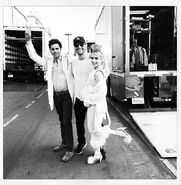 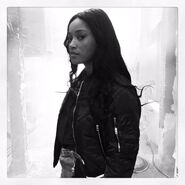 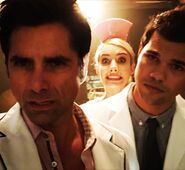 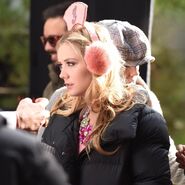 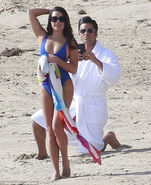 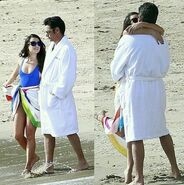 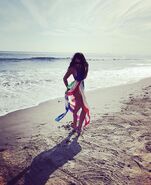 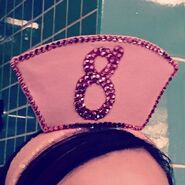 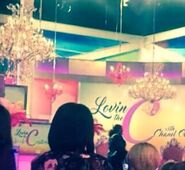 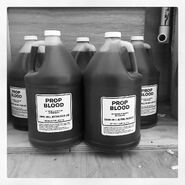 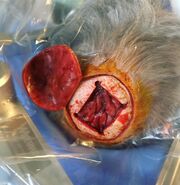 Preview Where Will You Be When The Bomb Goes Off? Season 2 Ep. 10 SCREAM QUEENS

Chanel Finds Out That Dr. Brock Holt Is Going To Propose To Her Season 2 Ep. 10 SCREAM QUEENS