“It was only a matter of time before things got out of hand at this sorority and someone got killed.”
—Dean Cathy Munsch to the Kappa Kappa Tau sisters

Hell Week is the second episode of the first season of Scream Queens, and the second episode overall. It aired on Tuesday, September 22, 2015 on Fox after the first episode, Pilot, as a special two-hour premiere. This episode was directed and written by Brad Falchuk, with Ryan Murphy and Ian Brennan joining him as writers.

With the death of two Kappa Kappa Tau members, Wallace University welcomes a detective and an incompetent security guard to keep the students safe. Meanwhile, a curious Grace tries to discover Kappa's darkest secrets while Chanel and Chad have problems in their relationship. The Chanels continue with their sorority's "hell week" and a character gets killed-off with an unexpected ending.

Kappa Kappa Tau's "hell week" continues, as it welcomes Detective Chisolm and Denise Hemphill, a security guard who has rather odd methods in protecting the girls from the killer. The Chanels still don't know what to do with Chanel #2's body, who was killed by the Red Devil in the previous episode. After Hester suggests to put her in food processor or boning her, Chanel decides to put the body in the same freezer where they put Ms. Bean's body. Hester promises to keep the secret of #2's death.

Grace goes to the house basement, where she founds a mysterious locked door and tries to open it. Chanel #5 catches her and says that only Chanel has the key of that door. Grace tells about the secret door to Pete, who says that people has been whispering for years that the Kappa house has a really dark secret. This makes him think that Dean Munsch's office may have some archives that can explain that secret, so they both think at the same time that they will have to break in.

They start kissing passionately but Grace stops him, saying that they can't kiss if there is a killer in the campus of Wallace University. They both agree that she will break into that secret door at Kappa house and he will break into the Dean's office.

Media attention descends on Wallace University after the murder of a Kappa pledge, so Cathy's job is in risk. This problem increases when Grace's father, Wes Gardner, wants to remove Grace from the school, because he fears that something could happen to her. A flirty Munsch convinces him to keep his daughter at school, but Wes demands to be hired as a professor so that he can keep an eye on her. She says that she finds good parenting attractive.

After Grace breaks into the secret room at basement of the Kappa house, Chanel interrupts her and tells her that room keeps Kappa's darkest secrets. Chanel proceeds to tell that a legend says 20 years ago a girl died in a bathtub that is in that basement, but was before in one of the bathrooms, giving birth. She also reveals that Cathy knew about the story but decided to cover it up so no one could find out. After Chanel leaves, Grace asks herself who the baby is.

After having sex, Chanel realizes that her boyfriend Chad doesn't really love her so breaks up with him. He return to his dormitory, with his roommate Boone.

Boone says that he is scared of the killer, so Chad, as his best friend, let him sleep with him, but clarifies that Boone will not try touch him at night like past times and will respect Chad's heterosexuality. Chanel, regretful, enters to the room to she can fix her relationship with Chad, but walks in on them sharing a bed together and believes that Chad is gay. After he explains the situation, that Boone was scared and nobody knows that he, Boone, is gay, Chad breaks up with her for being an "spoiled, homophobic little girl."

Pete breaks into Munsch's office, and finds an archive with some names that can be related with Kappa's past, so he writes them on a sheet. Unaware that the Red Devil is behind him, the killer hits him in the head. Pete wakes up tied outside of building with a note that says "MYOB" (Mind Your Own Business). At his dormitory, Grace tells him about the Kappa legend and he, shirtless, shows her the names that he wrote on the sheet. Grace opens the closet to give him something to put on, but discovers the Red Devil costume, which happens to be the mascot of the university. Grace freaks out and asks Pete about his age, he answers that he will turn 20 in a month. Scared, Grace leaves the room because that is the exact same year that the baby would have, and thinks that Pete might be the killer.

Boone goes to talk to The Chanels to tell Chanel that there is no need for her to tell everyone about his sexuality, because he wants to come out in his own way soon. He proposes that after he comes out, they accept him in Kappa, and Chanel likes the idea because that would give her a good reputation as the first girl who accepts a gay man in her sorority. Chanel #5 disagrees, but Boone leaves knowing that they will consider his idea.

At night, after Denise and her friend Shondell fall asleep outside of the Kappa house and Gigi goes on a date with Grace's father, Chanel survives an attack by the Red Devil. Denise hears her scream and goes into the house, leaving Shondell sleeping in the car. The girls want to go upstairs to see if the killer is still there, but the truth is that he now inside of Denise's car killing Shondell. Denise tell them to not go upstairs but they do, so she returns to the car and finds Shondell dead, while the girls find a note written on the wall that says "SLUTS WILL DIE". Inside the Dickie Dollar Scholars house, its members find a dead Boone laying on the dinner table with his throat cut.

Chad and Denise interrupt the last dinner of "hell week" at Kappa, to announce that Shondell's body has disappeared and that Boone is dead. At the end of the episode, the Red Devil goes to the mortuary and opens the drawer Boone's body is in. Boone opens his eyes and the episode ends with him asking "What took you so long?", peeling off his fake cut, and revealing himself to be the Red Devil's ally.

This episode was watched in its original premiere by 4.04 million U.S. viewers. Along with Pilot, Hell Week received mixed reviews from critics. Terri Schwartz from IGN stated that "Ryan Murphy has worked his TV magic again with a killer start to Scream Queens. From the acting to the costuming to the writing, everything about this concept and execution works. Scream Queens is as funny and self-aware as it needs to be to not bore audiences, but also offers up enough mystery and intrigue to keep even the biggest skeptic entertained," giving the episodes 9.7 out of 10.[1] Melissa Maerz from Entertainment Weekley thought that "Scream Queens is flawed, but it’s worth watching, simply because there’s nothing easy about it. The casual brutality takes just as much work to think about as it does to watch."[2] In a negative review, Ben Travers from Indiewire gave the two-hour premiere a C+ and added, "Scream Queens will be lucky if it survives its first season. Murphy may not be able to tell the difference, but modern TV audiences know how to spot a fake."[3]

Critics praised the performance of Jamie Lee Curtis. A.V. Club's LaToya Ferguson said that she "is able to take that mean-spirited nature and darkness and harness its power perfectly," and gave the episode a C+.[4] Spencer Kornhaber from The Atlantic thought that the shows is "terrible-bad, rather than terrible-good."[5] The Hollywood Reporter's Daniel Fienberg cited that "the optimistic viewer would say that Scream Queens episode 2 is just a show settling into a sustainable rhythm after an outsized premiere, while a cynic would point to the propensity of Murphy shows inevitably to decline."[6] 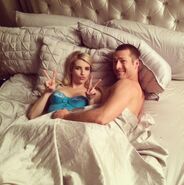 Retrieved from "https://scream-queens.fandom.com/wiki/Hell_Week?oldid=106688"
Community content is available under CC-BY-SA unless otherwise noted.