Julia Duffy (born Julia Margaret Hinds; June 27, 1951) is an American actress, best known for playing Stephanie Vanderkellen on the sitcom Newhart (1983–90). For this role, she received seven Emmy Award nominations and a 1988 Golden Globe Award nomination. The role also won her three Viewers for Quality Television awards. She is also notable for playing the original Maggie Campbell on Baby Talk (1991) and Allison Sugarbaker on Designing Women (1991–92).

Duffy's early career included parts in soap operas such as One Life to Live, The Doctors and Love of Life. Duffy also appeared in movies such as Night Warning (1981) and Cutter's Way (1981). She made an appearance on the television sitcom Cheers during the show's first season in 1982; she had been considered for the role of Diane Chambers.

In 1983, she played Princess Ariel Baaldorf in the medieval spoof Wizards and Warriors, which had a short run on the CBS television network.

Duffy joined the cast of the television series Newhart in its second season (she made an appearance in the 14th episode of the 1st season), playing the part of the self-infatuated preppy maid Stephanie Vanderkellen. It is probably her most popular role and one she played for seven seasons. She earned Emmy Award nominations for Outstanding Supporting Actress in a Comedy Series for the role every year from 1984 through 1990. She also received a Golden Globe nomination and won three Viewers For Quality Television Awards for her work. Julia was actually pregnant during several episodes of Newhart. To hide it, she wore baggy clothes and stood behind furniture.

After the end of Newhart, Duffy briefly starred in the sitcom Baby Talk alongside George Clooney. She worked again with Clooney some years later in the Coen Brothers' comedy Intolerable Cruelty). She then joined Designing Women, essentially replacing Delta Burke who was let go after quarrels with producers. Duffy played the newly created role of Allison Sugarbaker. Duffy's season was the show's highest-rated, but producers chose not to have her return for what would be its final year.

From 1993-95, Duffy played Barb Ballantine on the short-lived comedy series The Mommies. Duffy played Lindsay Mercer, one of the failed buyers of Winfred-Lauder and the ex-wife of Lord Mercer on The Drew Carey Show. She has a recurring role on the Nickelodeon series Drake & Josh as Linda Hayfer, a high school English teacher who despises Drake (Drake Bell). She appeared on The Suite Life of Zack & Cody as the rich mother of Jason, a boy who goes on a date with Maddie Fitzpatrick (Ashley Tisdale).

She made a brief appearance in the Nickelodeon sitcom True Jackson, VP as the owner of a stage that LuLu wanted to rent, she also had an obsession with Elvis Presley saying that his spirit lived on in that building, but it was really rats.

Duffy graduated from The American Academy of Dramatic Arts in New York in 1972. She has been married since 1984 to actor Jerry Lacy, co-star of Dark Shadows and Love of Life, and has 2 children, Kerry Kathleen and Daniel. They live in Los Angeles. 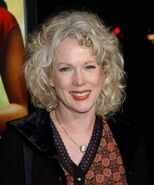 Retrieved from "https://scream-queens.fandom.com/wiki/Julia_Duffy?oldid=81870"
Community content is available under CC-BY-SA unless otherwise noted.