He guest-starred as Randal in Season 2 of Scream Queens.

Bigley began his acting career in San Francisco, California. He appeared in a seven-month run of "Killer Joe" at Profiles Theatre in Chicago. He also performed in "A Separate Peace" at Chicago's Steppenwolf Theater. After working with actor Vince Vaughn on a TV pilot, Bigley moved to Los Angeles in 2010 and worked jobs including catering for a Jerry Springer game show on GSN, Baggage. He landed a part in Vaughn's 2011 movie The Dilemma and went on to appear onscreen in film and television, including on the series Bones, CSI: Miami and Chicago Code before winning the role of rookie EMT Brian Czyk the USA Network series Sirens.

Bigley was born in Yuba City, California, and studied acting at DePaul University, in Chicago, Illinois. He began learning comedy as a defense mechanism to stave off bullying. Bigley married actress Kate Cobb on November 8, 2014, in Chicago. The two have appeared together in Funny or Die comedy videos made by their BigCob Productions. 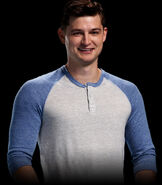 Retrieved from "https://scream-queens.fandom.com/wiki/Kevin_Bigley?oldid=95791"
Community content is available under CC-BY-SA unless otherwise noted.