“What's wrong with her? She looks awful!”
—Mandy after Sophia gave birth[src]

Mandy Greenwell was a recurring character on Season One of Scream Queens until her death in Haunted House. She was part of Kappa Kappa Tau during 1995.

She is portrayed by Jennifer Aspen (older version), and Grace Phipps (younger version).

Mandy is a former student of Wallace University and an old member of Kappa Kappa Tau in 1995. On a party night, Mandy was enjoying the fun with Bethany and Coco when Amy approached them with bloody hands. Frantically following Amy to the bathroom, Mandy along with Bethany found Sophia holding an infant in the bathtub. Coco then showed up and told everyone in the room that the girls' jam, Waterfalls by TLC, is playing down at the party. Didn't want to miss their favorite song, Mandy, Bethany and Coco ran back to the party to dance and have fun, leaving Amy alone with Sophia. When they came back, the three girls was shocked to find out that Sophia was already dead.

After Amy asked what should the girls do with Sophia's body, Mandy suggested that they could drop Sophia's body at an emergency room and then pretend that Sophia died of natural causes. However, her idea was quickly shut down by Bethany.

Grace and Pete find where she lives and go to see her. Having been expecting someone to come and ask her about the bathtub death, she invites them to come in. A flashback of the night is shown where they all discuss what to do. Bethany suggests calling the police, a suggestion that Cathy turns down, stating that the three girls could go to jail for negligible homicide, because they chose to go back to the party rather than help Sophia. Ms. Bean suggests cutting her up and grounding her into sausage that she could sell at the farmer's market or feed to the girls at the sorority, which freaks Mandy and the other girls out.

Cathy then declares that they'll all have to bury the body and place bags over their heads so they can't see where their going and drives them to the burial spot. She then makes Mandy and the other girls dig, while explaining to them that they'll be thankful for this one day. Mandy then refers to Cathy as the devil, telling Grace and Pete to watch out for her. Later that night, as she's watching the 1993 box office horror movie Leprechaun, an unknown person begins to knock on her door.

She picks up her baseball bat and walks towards the door. Opening it, she walks outside to see who was making that noise, and sees that it was no one. She then goes back into the trailer and puts a chair in front of the door to make sure no one could get in. The unknown person then begins to rattle and shake the trailer, causing her to freak out and start to back up. She turns on the light and looks behind her to see the unknown person is the Red Devil. She turns around screams as the Red Devil raises up a knife and continues to scream as she is brutally stabbed to death. The movie is shown again, with the Leprechaun laughing as Mandy is murdered.

Her body is later found swinging from the roof in front of the back door of the Shady Lane house by Chad and Hester as they run out the door after finding the bodies of Ms. Bean, Shondell, Coney, and Sonya. Later on that same night, it is again found, this time by Zayday, Earl Grey, Grace and Pete as they are searching for all of the bodies. At the end of the night, when Detective Chisolm is stating the bodies that were found in the house, he refers to Mandy as "Jane Doe", because the police didn't know her identity.

Mandy is nervous, curious and not very independent. Back in 1995, when Mandy first saw Sophia bleeding in pain with her baby, Mandy didn't freak out too much but didn't worry that much either, she was very helpless and asked a lot of questions and wasn't sure of what to do in a serious situation like that. In the present, she is absolutely traumatized and nervous about the incident and decided to separate herself from civilization by living in an old trailer far away in an isolated area. She is very afraid of Cathy and has Sophia's baby mystery constantly on her mind, when Grace and Pete came to visit her she already had everything planned to tell them everything they needed to know.

Late at night, while she is watching the well known 1993 box office horror movie Leprechaun, an unknown person, presumably the Red Devil, knocks on her door. She picks up a baseball bat as self-defense and goes to open the door, but sees that no one is outside. As she heads back inside, the unknown person starts knocking and rattling the trailer, so she quickly blocks off the door with a chair. She starts to calm down when the noise stops, but as she turns on the light to look in her mirror, she sees the Red Devil standing behind her and screams in fear. She backs up and turns around facing the Red Devil, and he quickly takes out a knife. She is then brutally stabbed to death while screaming in agony. 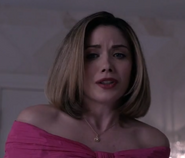 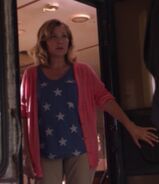 Retrieved from "https://scream-queens.fandom.com/wiki/Mandy_Greenwell?oldid=105946"
Community content is available under CC-BY-SA unless otherwise noted.