“Look, we get it. We're human shields. We can all stop pussyfooting around it, because I, myself, am fine with the arrangement. I've really gotten used to the clothes.”
—Marguerite to Cathy Munsch[src]

Marguerite Honeywell, better known as Chanel #7, was a recurring character on Season Two of Scream Queens. She was a patient at C.U.R.E. diagnosed with Marfan syndrome, a genetic disorder of the body's connective tissues, resulting in extremely long limbs.

She is portrayed by Andrea Erikson Stein.

As Cathy is looking over new patient files in her office, Marguerite Honeywell comes in and introduces herself. She explains that she suffers from Marfan syndrome, a genetic disorder that affects the body's connective tissues and often results in very long limbs. Cathy admits that her name is really a mouthful and asks if she would mind being called "Marfan," to which Marguerite seems insulted.

Later on, Chanel decides to recruit some of the new patients to join the Chanels, not only so the newbies can do all of the work, but also so they can be used as bait for the Green Meanie. She and #3 approach Marguerite in the hallway, and ask her why she would make a good Chanel. Marguerite seems confused, as she thought the girls were delivering her important information about her condition, and Chanel clarifies by saying that her condition is about to greatly improve after becoming a Chanel. Chanel #3 then asks her if she likes money and telling it like it is, and Marguerite says yes, so Chanel makes her an official member of the group.

At the Chanels' apartment, Chanel introduces the newest Chanels to #5. She refers to Marguerite as Chanel #7 and jokingly explains that she has Abe Lincoln syndrome. #5 seems completely opposed to the idea of new Chanels, but Chanel overrides her opinion, and the girls all toast to their new servants/human shields, which immediately alarms Marguerite.

The next night, the Chanels decide to throw a slumber party at the hospital to celebrate the addition of the newest Chanels. They are all seen giving each other makeovers, having pillow fights, and dancing the night away. Chanel then gathers everyone around and begins distributing gifts. While Daria and Tristan go to the morgue to fight over Daria's gift, Marguerite continues dancing with the rest of the girls. As Daria comes back to the party and leaves Tristan in the morgue alone, the Chanels realize he will be killed and begin running to his rescue. However, Marguerite decides to stay behind with Daria.

In the morning, all of the Chanels are gathered in Cathy's office. Cathy scolds the girls for hiring three new Chanels as Green Meanie bait, but admits that Chanel's plan may have had some merit, and that with the new influx of patients, there is double the workload, so she is all for having more Chanels to help improve efficiency. However, she alludes to the fact that she cannot condone the whole bait aspect, to which Marguerite tells her to stop pussy footing around. She addresses that they all know they are human shields, and that she is totally fine with the arrangement and has really gotten used to the cute clothes. Cathy then confesses she hired new Chanels #9-11, and Chanel demands that they, along with Marguerite and Daria, go clean out #5's dirty bedpan, and the girls leave to do so.

Marguerite confidently leads the group down the hall, but as they turn a corner, the Green Meanie suddenly pops out, wielding two machetes. Marguerite screams and runs in the other direction, along with the others, but in the process, she accidentally pushes Chanel #11 down, and ends up getting her killed by the Green Meanie.

Marguerite is first seen outside the hospital with Zayday, Ingrid, and the rest of the Chanels, as Cathy is showing them contaminated blood samples, explaining that most of the blood in the hospital is unusable. She declares that due to the blood shortage, they are in desperate need of donations, so Chanel suggests that they hold a blood drive, to which Cathy agrees.

Shortly thereafter, Ingrid gathers the hospital staff for a meeting outside, and Marguerite is shown amongst the crowd, standing with her fellow Chanels. After being interrupted multiple times, Ingrid tells everyone to shut up, and Marguerite nods her head in agreement. Ingrid then announces that the blood drive is now being turned into a contest, with the prize being an all-expense paid trip to Blood Island. All of the staff begin cheering, including Marguerite, who starts screaming and jumping in excitement.

Later that day, at the Chanels' apartment, Marguerite is sitting on the couch with the rest of the girls, donating blood to help Chanel win the blood drive. She has a plate on her lap and a sandwich in hand, and after Chanel #5 starts feeling woozy from all the blood she's given, she asks Marguerite for a bite of her sandwich. Marguerite rudely declines, and Chanel praises her for standing her ground.

In order to maintain Brock's affection and bridge the age gap between them, Chanel plans a World War II themed date at the Chanels' apartment. All of the Chanels also attend, each dressed in period clothing. Marguerite is briefly seen hoop rolling, a game that was popular in the 40s, which involved the player using a hammer-like object to roll a large wooden hoop along the ground. She then joins the rest of the Chanels to tend to Brock, as women during that time would have done when their husbands came back from the war. However, instead of appreciating the party, Brock ends up getting offended, seeing as he wasn't born until the 60s, and as he's leaving, the Chanels all wave goodbye to him, including Marguerite.

Hester decides to call a Green Meanie summit, inviting Ingrid, Cassidy, and Wes to come together to not only discuss past murders, but also to divvy up the remaining murders so that no one's feelings get hurt. To get everyone on the same page, Hester plans a game called "Who Gets to Kill the Chanels?" and lays pictures of each of the Chanels out on the coffee table, including Marguerite. Wes tries to bargain with Ingrid, and agrees to let her kill #3, #5, #8, and Marguerite in exchange for getting to murder Chanel. However, after the group takes a vote, Ingrid gets assigned Chanel, so Wes, much to his disappointment, gets stuck with killing the remaining Chanels.

Later, as Marguerite is walking down one of the hospital's hallways, she sees a plate of her favorite cookies. She exclaims happily that they are snickerdoodles and leans down to take a bite. Unfortunately for her, the Green Meanie, with a noose in hand, removes one of the ceiling plates from above her. He then lowers the noose down around her neck and begins to pull upwards before Marguerite can even take her first bite. He struggles for a bit to lift Marguerite's tall body off the ground, but after a matter of seconds, she is dead, hanging from the noose. She is found soon after by Chanel #5, who lets out a scream, drawing the attention of Cathy, who is accompanied by Arthur Annenburg. Arthur insists that they contact the police, but Cathy tries to play it off as a heart attack, explaining that Marguerite suffers from Marfan syndrome, which causes increased heart complications. She then instructs #5 to take Marguerite's body to her "special morgue," in reference to the swamp.

Shortly thereafter, Wes is seen going for a run with Cassidy. He admits that killing people demands serious strength and stamina, explaining that Marguerite almost gave him a hernia after trying to lift her dead weight off the ground.

While walking down a hospital corridor, Marguerite spots a plate of snickerdoodles laying on the ground. She excitedly runs toward the cookies, and squats down to eat a few. However, before she can even take a bite, the Green Meanie, while crouched in the ceiling, slides over one of the ceiling tiles above Marguerite, allowing him to lower down a noose. He quickly swings it around her neck, and pulls her body upwards, as Marguerite begins gagging and thrashing about. At first, the Green Meanie struggles to lift her up, seeing as she is so tall, but eventually he gets her off the ground, and she dies of asphyxiation soon after. Her lifeless body is left swinging back and forth in the hallway, until the Green Meanie drops the noose, letting her body crash to the ground. 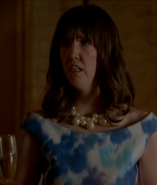 Retrieved from "https://scream-queens.fandom.com/wiki/Marguerite_Honeywell?oldid=111707"
Community content is available under CC-BY-SA unless otherwise noted.