Patrick Arnold Shriver Schwarzenegger is an American model and actor.

He played the role of Chad Radwell's younger brother, Thad, on Season One of the horror-comedy series Scream Queens.

Schwarzenegger was born and raised in Los Angeles, California. He is the third of four children and eldest son of Maria Shriver, a journalist and author who is a member of the Kennedy family, and Arnold Schwarzenegger, an Austrian-born bodybuilder, actor, and former Republican California Governor.

Schwarzenegger graduated from Brentwood High School in 2012. Since 2012, he has been studying at the University of Southern California.

Schwarzenegger's parents helped him found his company Project360 when he was 15. The philanthropic clothing line has a full menswear collection on the horizon and a mid-five-figures net from 2010, according to Details magazine. Patrick is also signed with LA Models, which has plans to push him for Ralph Lauren and Armani ad campaigns. He has stated that he hopes to raise awareness of his clothing company by taking on high profile modeling jobs.

In 2011, he worked a summer internship at The Grove, an upscale outdoor mall in Los Angeles. He posed shirtless for a highly visible Hudson Jeans billboard advertisement seen on Sunset Boulevard in Hollywood. In October 2013, he starred as Romeo in the music video for "Right There" by Ariana Grande. Schwarzenegger made his feature film debut in 2006's The Benchwarmers. He also appeared in 2012's Stuck in Love, 2013's Grown Ups 2 and 2015's Dear Eleanor. He is set to make his leading role debut in the film Midnight Sun, alongside Bella Thorne. Schwarzenegger will also appear in the 2016 film North, starring Jacob Lofland and Sophie Kennedy Clark.

Ryan Murphy confirmed via Twitter his participation on Season One of Scream Queens,[1][2] where he played the role of Chad's younger brother Thad Radwell.[3] This was Schwarzenegger's television debut. 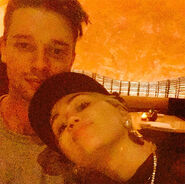 Retrieved from "https://scream-queens.fandom.com/wiki/Patrick_Schwarzenegger?oldid=105621"
Community content is available under CC-BY-SA unless otherwise noted.