Philip Casnoff is an American actor, known for his roles in various TV series and Broadway shows. He has also been a director for a several episodes of the two series Monk and Strong Medicine.

He guest-starred on Season One of Scream Queens as Steven Munsch, ex-husband of Cathy Munsch.

Casnoff began his theater career touring in the 1972–73 national company of Godspell where he understudied Jesus and Judas. He was cast as an understudy for the title role in the 1976 Broadway production of Rockabye Hamlet.

Casnoff's first major TV role was that of the main antagonist Elkanah Bent in the popular 1985 miniseries North and South. He went on to reprise the role in two sequels which aired in 1986 and 1994.

In 1988, Casnoff starred as Freddie Trumper in the Broadway musical, Chess and received the Theater World Award for Best Debut Performance.

Casnoff has also appeared on Broadway with roles in Shogun: The Musical, and Chicago.

In 1992, he was chosen to play Frank Sinatra in the television miniseries Sinatra and went on to receive a Golden Globe nomination for his performance.

He has also had roles on Oz, Strong Medicine, NCIS, and Dollhouse.

Casnoff's first leading role in a feature film was in a movie Sight Unseen, which is still in a post-production with release date still TBA.

Casnoff graduated from Central High School in June 1967; and attended Wesleyan University, attaining his B.A. in 1971. He has been married to actress Roxanne Hart since 1984. They have two sons, Alexander and Macklin. Casnoff presently lives in Los Angeles. 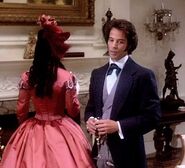 Retrieved from "https://scream-queens.fandom.com/wiki/Philip_Casnoff?oldid=81876"
Community content is available under CC-BY-SA unless otherwise noted.