“The Red Devil gives me the chance to have a personality and some humor while at the same time be terrifying and scary.”
—Riley Schmidt on playing the Red Devil[src]

Christopher Riley Schmidt, son of Karen and Michael Schmidt, was born February 11, 1976 in St. Louis, Missouri. His career began with modeling at age 17 after he sent photos in to a local modeling agency when he was a junior in high school. He attended St. John Vianney High School in Kirkwood, Missouri and graduated in 1994. He later went on to obtain a Bachelor of Journalism degree from the University of Missouri in 1998. There, he was also a member of the Sigma Chi Fraternity.

After graduating college, he moved to Hollywood to pursue a career in acting and entertainment. Soon after, he landed a small role on NBC's soap opera Passions. He later guest starred on other hit TV shows such as 7th Heaven, Sabrina the Teenage Witch, Power Rangers: Time Force, Cold Case, Drake & Josh, ER, and Days of Our Lives.

In 2011, he received a call from his casting agent stating that Ryan Murphy and Ian Brennan were looking for an actor with a similar build to Dylan McDermott to wear a sexual asphyxiation bondage suit in American Horror Story. He had never done anything like this before, but he auditioned anyway, and his agent called him the next day telling him that he got the job. His character became known as the "Rubber Man" and is Schmidt's best known role to date.

A few years later, when Ryan Murphy needed someone to put on a suit for his latest horror-comedy series Scream Queens, Schmidt was his go-to guy. He performed stunts as the Red Devil on Season One of Fox's Scream Queens and made an appearance as Zak, a pizza delivery man in the episode Dorkus.

Riley got married to his long-term girlfriend Jessica Gehring (co-founder of BeautyCon in LA) on June 20, 2015. They have multiple children together. 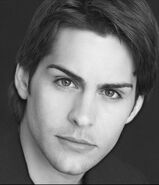 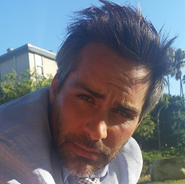 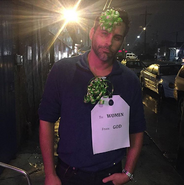 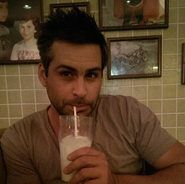 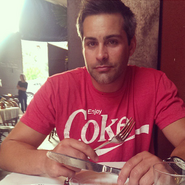 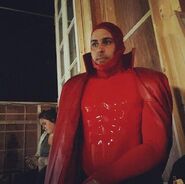 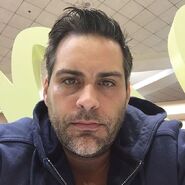 Retrieved from "https://scream-queens.fandom.com/wiki/Riley_Schmidt?oldid=113752"
Community content is available under CC-BY-SA unless otherwise noted.