Sam was a recurring character on Season One of Scream Queens. She was part of the Kappa Kappa Tau sorority until her death in Seven Minutes in Hell.

She is portrayed by Jeanna Han.

Sam is first seen talking to Zayday at the Kappa Kappa Tau's pledge party. She is introduced by Chanel with the nickname, Predatory Lez, due to her sexuality. Sam, along with the other new pledges, later witnesses Chanel's accidental murder of Ms. Bean and screams in horror at the scene unfolding right in front of her. Blackmailed by the promise of handsome boyfriends and a trip to Cancun from Chanel, she agrees to lie to the police if Grace ever call the police about the deadly incident and later helps hide Ms. Bean's body in a freezer. After "Hell Week" start for the new pledges, Sam, along with the other new pledges, is seen buried in the ground with only her head showing by Chanel #3 and Chanel #5. The Red Devil appears using a lawnmower and decapitates Tiffany, leaving all of girls screaming in fear.

Sam is present when Dean Munch introduces Detective Chisolm to the Kappa Kappa Tau girls. She is later seen cleaning the floor of Kappa house with the other new pledges. After that, she is seen in her underwear and receives writings on her belly from Chanel. Later Chanel screams in fear when encounters the Red Devil, Sam shows up at the stairs along with everyone else to see what happened. The Kappa girls decided to go check if the Red Devil is still in the house. When they enter to a room, they see "SLUTS WILL DIE" written on the wall and scream in fear. Sam goes into the closet to check if the killer was still there, and reports to Chanel. In the last "Hell Week" dinner, Sam is eating with the girls when Denise and Chad interrupt the dinner to announce that Shondell and Boone are dead, which worries all of the girls.

Everyone is seen walking with candles towards the campus at night, because Dean Cathy has an announcement. Chanel #3 is trying to light her candle, and Sam arrives and lights her candle with hers. Chanel #3 asks if she is is hitting on her, but Sam says that she is only trying to make friends. She later reveals that she spied on her last night when she was changing her clothes and noticed that she has a tattoo that says "8/69", asking what it means. Chanel #3 says that Sam looks really cool, but tells her to not ask a lot of questions. Later, Sam is present when Dean Munsch introduces the new Wallace University mascot, Coney. She is later seen in the Intro to Film Analysis class with Grace and Jennifer, for which Wes Gardner, Grace's father, has become the new teacher. After Grace leaves the class angered, Wes says that they will start watching the film that we considers to be "the greatest film of all time", Sam asks if it is Blue Is the Warmest Color, but he reveals it to be the 1974 Tobe Hooper classic, The Texas Chain Saw Massacre.

Sam is hanging a picture of a woman on a motorcycle in her room when Chanel #3 enters. She says she wants to be good friends and tells Sam her secret, that her father was not her real father and her real father is Charles Manson, and forces Sam to secrecy. She says they should be "ali-buddies" to back each other up if another murder occurs. Sam agrees. They're later seen talking together until Chanel #3 interrupts their conversation to reveal to the other girls that she also dated Chad. Sam is surprised when Chanel introduces Hester as Chanel #6, after she gets a makeover. At the end of the episode, Sam is seen scared after Gigi gets attacked by Red Devil.

Sam is first seen when The Chanels and the pledges are carving pumpkins for Chanel Oberlin's fans, Sam reveals her drunk pumpkin and Chanel approves it. Zayday announces she is running for Kappa Kappa Tau president against Chanel, which surprises Sam and the other girls. She is later seen holding Jennifer's hand at Wes's class, while Jennifer is eating candle wax. At the end of the episode, Sam is present when everyone discusses Zayday's kidnapping and the bodies that were found at the Shady Lane house.

Sam is seen, along with Chanel #3, bailing Chanel out of the prison. After that, she had a bet with Chanel #3 on if Zayday lived or not, she won when Zayday appeared alive and Chanel #3 gave her the money.

Sam was first seen at the vote for Kappa president, her vote is unknown, but she probably voted for Zayday. When Zayday announced the slumber party and Chanel #3 tried to make a Spin the Bottle game, she was one of the sisters who agreed to have the party. During the game of Spin the Bottle, she kisses Chanel #3. In the bathroom, Chanel #3 reveals to Sam the reason she wears earmuffs, stating they cannot be a couple as her father is Charles Manson and she is crazy like him. During the game of Truth or Dare, Sam reveals Chanel #3's secret about her father, while Chanel #3 reveals that she has feelings for Sam at the same time, and Grace asks they repeat it again, which they do. Angered that Sam revealed her secret, Chanel #3 dares Sam to go down in the basement where they keep their deepest, darkest, secrets, and take a nap in the old Kappa bathtub in the basement, as a dare. Sam enters in the basement and asks if anyone is here, and asks to not jump and scare her, due to a trauma she has. She finds the bathtub, and gets attacked by the Red Devil. The Red Devil sits her in the tub after banging her head. Sam asks the Devil to reveal him/herself before killing Sam and she does so, as Sam says that she knew it was this person. Even after offering to help the Red Devil, she is disappointingly suffocated, taking away the chance of the others finding out who the Red Devil is. Her body is later found by Chanel #6. She is mentioned by Chanel #3 in the end of the episode, when they talk about Roger and Dodger deaths.

Sam is mentioned by Pete when he says that Wes could have been her killer because he was the only one to know about the tunnel in the Kappa house that the killer may have used to enter the house.

Sam is mentioned again when Chanel lists off the names of deceased characters; calling her Predatory Lez.

Sam is brave, independent and likes to state her opinion. She does not like males and thinks every guy is either a rapist or gross, she is an extremist feminist and feels more comfortable around women. She has a habit of trying to hide her more transparent views, such as her misandry and sexuality behind seemingly deep, but overall meaningless rhetoric. She likes to help and hang around with Chanel #3 and share secrets with her and vise versa.

Sam's style is pretty boyish with skinny jeans, sneakers, and boy shirts. She also has tattoos on both her arms.

As Sam and the other Kappa sisters play a very truthful game of Truth or Dare with the Dickie Dollar Scholars, Grace asks Sam what Chanel #3's deepest secret is. She admits to everyone that Chanels #3's biological father is Charles Manson, despite promising #3 that she would not tell anyone the secret. Chanel #3 becomes absolutely furious with her and dares her to go into the basement to sleep in the 1995 bath tub all night. After trying to apologize to Chanel #3 and reason with her, Sam heads down to the basement and slowly walks around in the dark, hoping that no one is down there to jump scare her. She finally finds the tub and kneels down to feel the inside of it only to discover that there is blood in it. Before Sam can investigate any further, the Red Devil sneaks up behind her, bangs her head on the tub, picks her up, and places her inside. Sam, terrified and not sure what to do, asks the Red Devil to reveal who he is. He obliges and removes his mask, and she says that she knew it was him all along. As the Red Devil then starts to approach her from behind, she begs for her life telling the Red Devil she will do anything for him not to kill her, but before she could even get a last word in, she is suffocated with a sheet of plastic, and her body is later found lifeless in the tub by Hester who wanted to check on Sam. 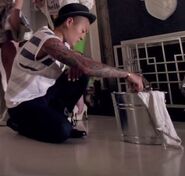 Retrieved from "https://scream-queens.fandom.com/wiki/Sam?oldid=113841"
Community content is available under CC-BY-SA unless otherwise noted.