Scream Queens is a horror-comedy slasher TV series that ran on Fox from 2015 to 2016. The first season was ordered on October 20, 2014, and the second season was announced on January 15, 2016. The series was created and run by Ryan Murphy, Brad Falchuk, and Ian Brennan. The series began filming during March 2015. The show had its world premiere on July 8th at the 2015 Comic-Con and premiered on September 22, 2015 on television.[1][2] Murphy, Falchuk, and Brennan also served as writers and directors, and Brian Grazer and Dante Di Loreto joined them as executive producers. The series was officially cancelled by Fox on May 15, 2017.

The series begins when all hell is about to break loose on the Wallace University campus when, exactly 20 years after a mysterious tragedy, a devil-clad killer begins to target the sisters of Kappa House. The super-charged comedy-horror series is a modern take on the classic whodunit with a killer cast. With at least one casualty each week until the mystery is solved, anyone could be the next victim - or the murderer.[3]

The second season graduates from the college campus and into an all-new location, as a terrifyingly funny murder mystery will begin once again. This time, the show was set in a hospital, where some of the most fascinating and bizarre medical cases are under observation.[4]

On October 20, 2014, it was announced that Fox had ordered a 13-episode season of Scream Queens, created by Ryan Murphy, Brad Falchuk, and Ian Brennan who also co-created Fox's musical hit TV series Glee. "Scream Queens will go straight to series. It’s a huge commitment and an expression of our faith in Ryan. We are ecstatic to have him, along with Brad, Ian and Dante, as our partners on this exciting ride", Gary Newman and Dana Walden, chairman-CEOs of Fox Television Group, said after wanting another TV series reuniting the creative team that delivered Glee. "The genre-bending concept, which blends true horror with big comedic moments, and the diverse and unforgettable characters will make this an interesting and exciting new show," they say.

Murphy wanted to work with his good friends Falchuk and Brennan again on something comedic after Glee, "and we are having a blast writing Scream Queens", he said. He confirmed that every season will revolve around two female leads. A nationwide search for those women during Season One, as well as 10 other supporting roles, started late 2014. Jamie Lee Curtis is an actress that Murphy has always wanted for his works, and he wrote the series for her.[5]

"It's anthological in nature, but there's a catch to it," Murphy said of Scream Queens' secret twist. "I can't reveal because it's different than American Horror Story, which resets completely every year. This doesn't do that."[5]

In December 2014, it was reported that Emma Roberts and Jamie Lee Curtis would be featured as the two lead roles. In January 2015, Lea Michele, Joe Manganiello, Keke Palmer, and Abigail Breslin joined the main cast of the series; as well as actress/singer Ariana Grande in a recurring capacity. Later that month it was announced that Nick Jonas would recur throughout the first season. Skyler Samuels, new comer Billie Lourd, Lucien Laviscount, Diego Boneta, and Glen Powell joined the main cast during February 2015. YouTube personalities, twins Aaron and Austin Rhodes, and Niecy Nash joined the recurring cast the same month.

In March 2015, Nasim Pedrad joined the cast as a series regular, while Breezy Eslin joined as a recurring character. The same month, Manganiello left the cast because the series couldn’t accommodate his commitments to promoting the film Magic Mike XXL internationally. Oliver Hudson joined the cast replacing Manganiello's role.[6]

On June 24, 2015, it was announced that Charisma Carpenter has joined the cast in a recurring capacity, playing the mother of Ariana Grande's character.[7] The next day Roger Bart was cast as the father.[8]

It was reported that filming was expected to commence in April 2015. The college Campus where Scream Queens will be filmed confirmed via Twitter that Jamie Lee Curtis, Ariana Grande, Abigail Breslin, and Nick Jonas will start shooting for the series during March 2015, a month before it was supposed to begin filming.[9] Emma Roberts, Skyler Samuels, Nasim Pedrad, Diego Boneta, Abigail Breslin, Nick Jonas, and Curtis were on set on March 13, 2015, confirming that filming started that day.[10][11][12] Shooting for the series went on hiatus on April 23, 2015, and resumed on June 17.[13][14]

The first teaser trailer of the series was released by Fox on February 13, 2015 on YouTube, as a Friday the 13th day gift. The next Black Friday, March 13, 2015, Fox sent Scream Queens gifts to promote the series.[15][16][17][18][19] The same day, a second promo featuring Emma Roberts as Chanel Oberlin was released.[20] However, it was later edited and relaunched, cutting out the letters "KNT" that were read on Robert's shirt, and changing the name of the fraternity house on the background, from "KNT" to "KKT".[21] On March 18, 2015, a new teaser featuring Keke Palmer as Zayday was released after Fox's Empire's season finale. A fourth promo was leaked on April 8, 2015, featuring Roberts once again, one day later it was officially released.[22][23] On April 17, 2015, Entertainment Weekly released three official posters of the series, confirming that the premiere of Scream Queens would be held in September of that year.[24] A new teaser was uploaded to the official Scream Queens YouTube channel on May 4,[25] and another during May 13 with actual footage of the series. On May 22 an Inside look was released.

The official release date of the series, September 22, 2015, was announced on June 24, and the next day it was announced that the premiere there will be a 2-hour premire.[2][30]

The main title sequence was released on Ryan Murphy's YouTube channel in September 2nd, 2015. The sequence featured an original song called "You Belong To Me", which was co-written by the show’s composer Mac Quayle, singer Heather Heywood, executive producer Alexis Woodall, and was sung by Heywood.

In season 2, the theme song was used as the closing theme. 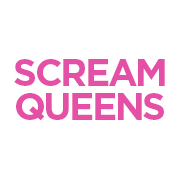 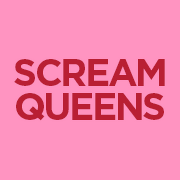 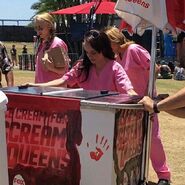 SCREAM QUEENS Behind The Scene With Diego Boneta

Retrieved from "https://scream-queens.fandom.com/wiki/Scream_Queens_(2015_TV_series)?oldid=113688"
Community content is available under CC-BY-SA unless otherwise noted.