“You wanna shack burger, or a double shack burger?”
—Shondell asks Denise as she brings some burgers[src]

Shondell Washington was a recurring character on Season One of Scream Queens. She was best friends with Denise Hemphill and served as a security guard at Best Buy until her death in Hell Week.

She is portrayed by Deneen Tyler.

Shondell leaves her Best Buy parking lot security job and arrives to meet with her friend Denise. Shondell sneakily scares Denise knowing that Denise is trying to stay focused and aware of the Red Devil, Shondell brings some burgers and gets inside the car and asks Denise if she wants a shack burger or a double shack burger, and they both joke around in the car having fun. Later, they both fall asleep and Denise hears Chanel's screams from Kappa house and immediately gets out of the car to see what the problem is, while Shondell is still asleep and now alone in the car. After the Red Devil is not found upstairs where Chanel said he was, Denise immediately tries to warn Shondell on her walkie-talkie to inform her that the killer is on the loose. Denise stops running and catches a breath while Shondell is still sleeping. Unfortunately, Shondell couldn't hear Denise's warning and unexpectedly gets stabbed in the throat with a butcher knife from the Red Devil who somehow came in the backseat of the car, Denise finds her body and screams and pushes Shondell's dead body out of the car. Later, Denise tells the Kappa sisters that Shondell's body just became missing after Denise dumped it and drove off.

Shondell is mentioned by Denise to Grace and Zayday about the Red Devil stabbing her throat and to rest in peace and not being as cute as Denise. When Denise hand-cuffs Zayday and questions her, Denise mentions a CD that Zayday bought at Best Buy, and Denise mentions that it is the same Best Buy where Shondell works. Zayday says that she was inside Kappa house at the time Shondell got murdered, but Denise didn't quite believe her.

Shondell is mentioned by Denise by being promised from above to avenge her death and find the Red Devil and stop him.

In the Shady Lane house, Chad and Hester look around and find Ms. Bean's corpse, after they find out that it is real, Chad backs up in fear into a murphy bed which makes it fall open and Shondell's body tumbles out onto the floor, Chad and Hester then run out of the room screaming and find all the other dead victims bodies. Shondell's body is later found in the same spot on the floor by Grace, Pete, Zayday, and Earl. Detective Chisolm tells Kappa house all the victims found and mentions Shondell as being one of them.

When Pete tries his best to explain to Grace about why he helped the Red Devil and actually wore the outfit and murdered a few people, he is shown in a flashback spying on Boone dressed up as the Red Devil coming out of Denise's truck after killing Shondell. Shondell is then shown lifeless before Denise comes.

Shondell is mentioned again by Denise who is in a courtroom explaining her experience in Wallace University with the Red Devil killings and says that her and her best friend Shondell were employed to protect the campus until Shondell got stabbed in the face and pushed out a car.

Shondell is funny, nice and rebellious. Shondell leaves her Best Buy Security Guard job to bring her best friend Denise some burgers and they both chat and joke around in the car while she keeps Denise some company. She also likes being unexpected and likes to scare Denise like in horror movies.

While on duty, Shondell falls asleep in the patrol car next to Denise. Shortly after, Denise hears Chanel scream and goes inside the Kappa house to see what the problem is. When Denise gets inside, Chanel claims she was attacked by the Red Devil, and the girls go upstairs to find and defend him off. Meanwhile, the Red Devil somehow breaks into the patrol car and stabs Shondell in the throat with a butcher knife. Unfortunately, Denise comes back to find Shondell's dead body in the passenger seat with the knife sticking out and a lot of blood spilling from her throat. She screams in horror and drives away, shoving Shondell's body out of the car and onto the side of the road. 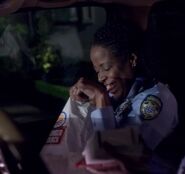 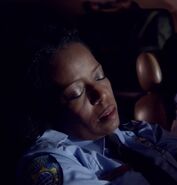 Retrieved from "https://scream-queens.fandom.com/wiki/Shondell_Washington?oldid=111792"
Community content is available under CC-BY-SA unless otherwise noted.