“You guys, what do you think Taylor Swift is doing right now?”
—Tiffany buried up to her neck with the other Kappa pledges[src]

Tiffany DeSalle was a recurring character on Season One of Scream Queens. She pledged Kappa Kappa Tau in Pilot and was killed by the Red Devil in that same episode.

She is portrayed by Whitney Meyer.

Tiffany is first seen at the KKT pledge party. She is introduced by Chanel as "Tiffany something", with the nickname Deaf Taylor Swift, due to her hearing disabilities along with her love for Taylor Swift. Tiffany, along with the other new pledges, later witnesses Chanel's accidental murder of Ms. Bean and screams in horror at the scene. Blackmailed by the promise of handsome boyfriends and a trip to Cancun from Chanel, she agrees to lie to the police if Grace ever calls them about the deadly incident and later helps hide Ms. Bean's body in a freezer. After "Hell Week" starts for the new pledges, Tiffany, along with the other new pledges, is seen buried in the ground with only her head showing by Chanel #3 and Chanel #5. The Red Devil later appears with a lawnmower and drives towards the girls, causing all of them except Tiffany to start screaming. Since she is deaf, Tiffany thinks that the other pledges are singing a Taylor Swift song, and does not notice the Red Devil until it is too late, and she ends up getting her head mowed off.

After Tiffany's death, Gigi takes action and hires a security guard to protect the girls, while a murder investigation is taken place for Tiffany.

During the "Take Back the Night" rally, Cathy Munsch reveals Tiffany's last name and that her death was an accident, to which Hester sarcastically responds, "Her head was mowed off".

Tiffany is mentioned by Chanel when she says that she cannot believe that she and Chanel #2 are dead when Grace and Zayday are still alive.

When the people who are having Thanksgiving at Kappa house suspect one another and begin to tell their theories, when they start to interrogate Grace, it is mentioned that Grace was not buried with all the others when Tiffany was decapitated, and the reason being was because Chanel and Grace were talking at the Grind, saying they need to 'iron out' their differences.

Chanel mentions Tiffany when the Kappas go through all of the Red Devil's victims, calling her by her nickname: Deaf Taylor Swift.

Tiffany appears in a flashback during Hester's monologue explaining how her Red Devil plan worked. Later, her name can be seen shortly before the Chanels' verdict is settled, along with all the other victims of the Red Devil. Tiffany is also listed on a memorial plaque donated by the Radwell family for the campus. Chad was responsible for writing the inscription on the memorial, which reads, "I've always wanted to have sex with a deaf girl," which is clearly referring to Tiffany. It is here revealed that she was murdered by Boone Clemens, however, the Chanels were framed and arrested instead.

Tiffany is confident, crazy and obsessed with Taylor Swift. She knows every lyric to every Taylor Swift song and even though she is deaf, it does not stop Tiffany from trying to listen to Taylor Swift's songs and sing them, her favorite song of hers is Shake it Off, Tiffany will always sing it in awkward or dangerous situations because she loves it so much. She is very enthusiastic and is always in a good mood.

After Chanel #3, and Chanel #5 bury Tiffany, Jennifer, Hester, Sam, and Zayday up to their heads, they leave to the pledges in the ground all night. Later in the night, Zayday begins to hear strange noises and suspects that it could be a lawn mower. She starts screaming in fear, so the other girls scream as well, except for Tiffany since she is deaf and cannot tell that they are screaming. She assumes that they are singing, and starts singing along to "Shake It Off" by Taylor Swift. When Tiffany finally notices that the Red Devil is coming towards her on a lawn mower, she screams in fear, as she is unable to defend herself, and is slowly decapitated as the lawn mower passes over her.

Tiffany and Chad did not have an actual contact with each other. But in the episode The Final Girl(s), Chad wrote in the memorial inscription that he always wanted to have sex with the deaf girl. 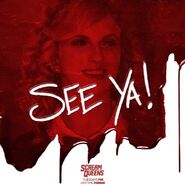 Retrieved from "https://scream-queens.fandom.com/wiki/Tiffany_DeSalle?oldid=102617"
Community content is available under CC-BY-SA unless otherwise noted.